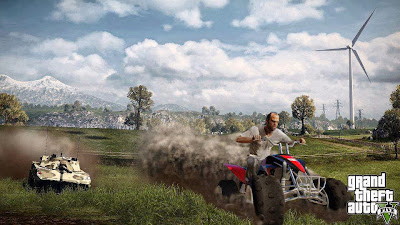 This looks bit better graphics than in game, but indeed that tank is driveable and has fully working tracks ..however... 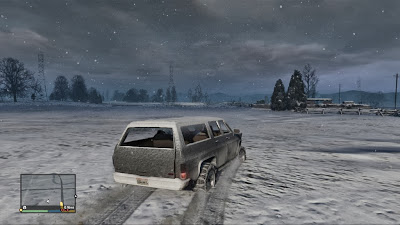 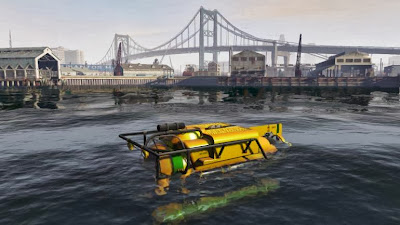 YES! that IS a working submarine and you can go underwater, also there is scuba diving gear..but....

So what's wrong? Here's my list of huge disappointments:

1. There are no missions with tank (where you have to steal one or use one)

2. If you drive over any vehicle with tank, you get instant police on your butt, yes, even if its in remote location and its a wreck ..whaaat? (update: well in some odd places you can run over 1-2 vehicles before you get police chasing you)

3. Whole ocean is detailed and there are sharks, underwater crash sites (ships, planes..etc), they have put lot of time and effort in all this, but made only 1 submarine and no underwater weapons?! (no harpoons..etc) ..WTF!? lame!!!!

4. Story mode + free roaming sucks after completing the game, you have to choose which character will die, after character dies, you are unable to re-buy their property (hangar, airfield..etc), im stuck at 78% completion due that, i did not complete missions that character had left (he died). You can't access any of his features after you finish story mode (could have added a free roaming with all characters)
5. there's no 4th character .. i was hoping there will be another character, but nope. whole story mode is only with 3 characters, even tho you have slot for 4th.
- Update: one option out of 3 will keep all 3 characters alive (option C).

6. there are only about 20 properties in total that you can buy .. very lame!

7. trains are still invincible .. even tank or huge quarry dump truck can't take it out.

8. lot of animation glitches are still there, that existed in gta iv, for example the helmet, where character takes helmet out of nowhere and when you sit in the car with helmet, it disappears like by magic! .. lot of phone bugs, where person is on phone, but not holding it or if you're in a boat and go scuba diving, the air tank on back goes thru boat's seat..lol.. ..etc .. cmon fix them already!

9. Most annoying bug is still there, where sometimes vehicle disappears when you turn around and then turn view back on vehicle and its gone !!! its so fucking stupid! i tuned up a vehicle and it disappeared right behind me.

10. vehicles disappear from house garage, i lost about 10 vehicles during story mode, they just fucking disappear from garage, so annoying .. specially when you have spent lot of money and time on tuning them.

11. There is only 1 stand-alone garage that can hold 4 vehicles only! .. WTF !??? like seriously. ..this is so dumb. they could put back the old good garage system that existed in gta san andreas, where you was able to have like 10-20 garages, each holding 1 - 6 vehicles + hangar that was able to hold ANY vehicle.

12. Biggest disappointment was snow .. that snow you see on screenshots, exists only during 2 missions, the prologue, which is just drive a vehicle down 1 road with cops on your ass and in one of the end missions where you go back to cemetary, its tiny, tiny area with snow, that's it...so much of snow ...pffffffffffff

13. Actually to think of it (this is edit 1), another very big disappointment is that there are those missions, where you can drive James Bond car (the aston martin db6 i think) with machine guns and spikes, you can shoot on demand and drop spikes, its awesome car, but only in mission .. whaa? ..and then those other mission based things, like that you can pick up a train car with helicopter, but only in mission, outside mission the magnet does not work ... same with some other things, where feature only works during mission, WHYYYY???? why not let us pick up cars with that helicopter and have fun?? why ruin the fun..i mean, feature is already THERE!! you just need to allow us to enable it outside mission. damn faggies..cmon really...i was so disappointed when i tried it outside mission and could not do those awesome things :(

14. Tank is very fragile, you run over about 10 vehicles and boom goes the tank itself ... seriously?!!

15. Tank can't drive underwater .. pfffh...everyone should know that tanks in real life do work underwater, they have limited air supply, but they can be driven underwater.

16. Tank has no useable turret / machine gun, even tho tanks in military base have m160 or similar machine gun on top, but you can't use it, yet another lameness ... i mean WHY? they have ALL the features in game to make it useable, in-vehicle weapon swap = check (in buzzard helicopter you can choose between 2 weapons), machine gun = check (hand-held machine gun would do fine or minigun). animation, bullets..etc = check (all exists) .. so why not make it useable?

17. Hangars can only hold 1 vehicle at a time .. if you choose from stored vehicles, it will only show the ones you have bought via internet (game internet, not real) .. so you can't even have more than like 5 vehicles in hangar, few planes, tank, truck..and blah. I managed to get fighter jet into hanger, but now if i want to swap to tank or other vehicles, i would lose the fighter. its so lame system...

18. Tuning is back, but only very few vehicles have cool visual details..kind a sucks. would be cool if you can tune armored truck and make it even better than it is, with a nice scoop in front and all, like a zombie apocalypse truck or something .. but naaah .. they couldn't bother :(

19. No monster trucks .. yet another very cool and awesome thing they haven't included .. there is one offroad truck that has quite huge wheels and quite high, but its far from real monster truck size. Monster truck was one of my favorite "toys" in san andreas.

There are more, but those are the ones that popped in my head right away, it's really very lame, i was expecting so much more out of this game.
Don't get me wrong, its a good game and surely worth playing, but i was just expecting a LOT more. I was hoping there is underwater combat, mountains have snow (like in Just Cause 2, where you have rain forests, deserts and snow on higher places, like on mountains) .. but yeah, i was soooo disappointed. Also almost no cool missions, only cool mission was the bank robbing, where you was able to use armored suits and a minigun to take out cops, it was quite cool mission, but rest just sucked. maybe also the big one at the end, where you steal 200 million worth of gold, it was quite awesome.